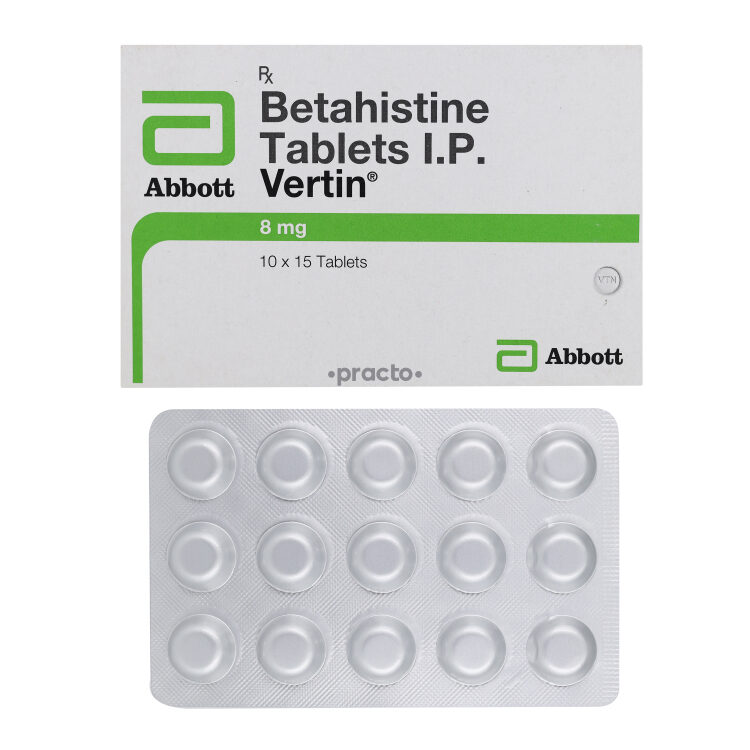 Vertin Tablet are available in various doses (8 mg, 16 mg, 32 mg, 48 mg). It is commonly used in the treatment of vertigo, Méniere’s disease and motion sickness. This tablet imitates the action of histamine thereby helping in the treatment of these issues. The pharmaceutical company Abbott Health is the manufacturer. It is to be orally administered and swallowed with water.

Uses and Benefits of Vertin:

This tablet is used to treat disorders such as:

Side Effects of Vertin:

Some of the most common side effects of this drug include indigestion, dry mouth, diarrhoea and drowsiness. Occurrence of adverse side effects is rare. However if you observe one of these symptoms, consult your doctor immediately:

Vertin tablets are available in the doses of 8 mg, 16 mg, 32 mg, and 48 mg. The doctor prescribes the particular dose to a person depending on certain factors such as age, severity of condition, pre-existence of other medical conditions and the type of disorder for which the medicine is used. The doctor might prescribe a higher dose initially and then reduce it if he/she finds it fit to do so. In most cases, patients are prescribed 2 to 3 tablets per day until the end of the course, which can last from 2-5 days (to relieve temporary symptoms of motion sickness, nausea and vomiting) to 1 year (in the treatment of chronic vertigo, Méniere’s disease, or inner ear problems). The course might be prolonged if the condition is serious. This tablet should be administered along with food to reduce the effects related to dyspepsia it exhibits.

Composition and Nature of Vertin:

The main component of this tablet is betahistine (16 mg).

Precautions and Warnings – When to Avoid Vertin Tablet?

Patients are advised to inform the doctor about all the drugs that they take on a regular basis. They should also acquaint the doctor with factors such as:

Some of the side effects of the Vertin tablets are bloating, headache, indigestion, vomiting or nausea. Though such symptoms go away after some days, however, if the symptoms persist then consult the doctor as soon as possible. In some of the cases you should go ahead and talk about the problems that you are facing after the consumption of the tablet.

Some of the conditions that require special consultation with the doctor prior to the prescription of this medicine are:

This medicine is not prescribed in patients who have a history of hypersensitivity or have a medical disorder called pheochromocytoma (a condition in which tumours develop in adrenal glands).

Here is a list of the medicines which have similar functions to that of Vertin Tablet and can be used as substitutes:

There are other medicines as well that work as substitutes of Vertin, but to know which drugs suits you the best, consult your doctor.

Vertin Interactions with Other Drugs:

All drugs interact differently from person to person. You should check all the possible interactions with your doctor before starting any medication. You should make sure that you don’t take the Vertin tablets in these cases as the interaction might be severe.

Interaction of Vertin Tablet with Alcohol

Interaction of Vertin tablet with the consumption of alcohol is unknown. We advise you to consult a doctor before taking the tablet.

Make sure that you don’t consume it with the listed tablets below as it might lead to severe health issues.

Interactions of the tablet with diseases

No information available. We advise you to consult your doctor and talk about the diet plan before consumption of the medicine.

If you have any kind of health issues or you are going through any medication for any health issue then make sure that you tell to the doctor as different medicines have different reactions with the tablet.

Betahistine is mainly a histamine H1-agonist and it has 0.07 times more efficacy than the chemical histamine itself. It works by triggering the H1-receptors present in the inner ear, thereby generating a vasodilatory effect. It also accelerates permeability in the blood vessels, because of which the endolymphatic pressure is reduced considerably. Betahistine supposedly works by enhancing vestibulocochlear blood flow and decreasing the disproportional operation of the sensory vestibular organs, thereby decelerating the symptoms of vertigo and balance disorders. Betahistine is simultaneously a histamine H3-receptor antagonist, which results in a magnified production of histamine from histaminergic nerve endings. Moreover, Betahistine raises the concentration of neurotransmitters, like, serotonin in the brainstem and prevents the functions of vestibular nuclei. It works by restoring proper balance and decreasing the symptoms of vertigo.

How to Use Vertin Tablet?

Vertin is a tablet that is used for the treatment of Meniere disease that affects the inner ear and it causes hearing and vertigo problem. You need to take the tablet of Vertin with food and make sure that you don’t take more tablets than advised by the doctor or it might lead to severe health issues. If you still face the problem and in case the medicine does not work then consult the doctor.

When Vertin is prescribed?

Doctors prescribe the patients for Vertin Tablets when they have a disorder in the inner ear and the tablet helps in the treatment of vertigo with Meniere’s disease. Vertin tablet helps in recovering from the problem and also decrease the pressure in the ears which are reasons behind the problems like dizziness, nausea, and imbalance or unsteadiness. It is also prescribed when a person is having a ringing sensation or has problems in hearing from one year. You need to take the tablet as prescribed by the doctor. Doctors usually prescribe the dosage and it depends on the overall health of the person and how the body reacts to the dosage. So if in case the tablet does not work after the completion of the dosage or you face any kind of allergy then it is advisable to consult your doctor.

Is Vertin banned in India?

Vertin Tablet is readily available in India. It is advisable to consult a doctor before starting a dose of this medicine.

1) For how long does a person with vertigo need to use Vertin before improvement is observed?

2) For how long does the effect of Vertin Tablet last?

Ans: The onset of action of this tablet starts within an hour and the effect lasts for 6 to 12 hours.

3) Can Vertin be used during pregnancy or when a woman is breast-feeding?

Ans: Pregnant women, those who are planning to conceive, and women who are already breast-feeding are advised to use this tablet with caution and under the strict guidance of the doctor.

4) Can one take migraine medications along with Vertin?

Ans: Vertin tablets are used to treat the symptoms of vertigo associated with migraine. Therefore, one can take anti-migraine drugs along with Vertin. For better understanding, patients should consult a doctor and follow their advice.

5) Can one drive a car after taking Vertin Tablet?

Ans: One of the side effects of this tablet is dizziness. Therefore, patients are advised against driving or handling heavy machineries after taking this medicine.

6) Why is the use of Vertin contradicted in patients suffering from Pheochromocytoma?

Ans: In patients suffering from Pheochromocytoma (a rare type of adrenal gland tumour), Vertin tablets are not given, because the medicine can trigger an increase in the concentration of the hormones that control blood pressure, metabolism, and heart rate. This can raise the patient’s risk of suffering from a stroke.

7) Can someone consume Vertin Tablet if she is breastfeeding?

8) What is Vertin used for?

Ans: It is used for to inner ear pressure which causes health problems like vertigo (dizziness), nausea, tinnitus (ringing in the ear) and people who suffered from hearing loss because of Meniere’s disease.

9) When should I take Vertin?

Ans: Make sure that you take Vertin tablets only after the doctor has prescribed you. For adults, the usual dosage is 1 to 2 tablets of 8 mg tablets or ½ to 1 16 mg tablets 3 times a day.

10) Do Vertin cause drowsiness?

Ans: There are few side effects of Vertin tablets, however, the symptoms don’t include drowsiness but it is also possible that the medicine belongs to the anti-vertigo class of drugs that might lead to drowsiness. It is better that you go ahead and consult your doctor about the dosage and side effects if you are having problems after consuming the tablet. You should also not take the tablet if you are going through any medication without the advice of the doctor.

11) Is Vertin Tablet safe with alcohol?

Ans: It is advisable to consult a doctor as the interaction with alcohol is unknown.

12) What are the side effects of Vertin Tablet?

Ans: List of major and minor side effects of Vertin tablets

13) What is the duration of effect of Vertin?

Ans; The effect of Vertin tablet lasts for around sixteen to seventeen hours. Lobate GM Cream is a corticosteroid which helps in reducing inflammation and itching of the skin. It effectively cures conditions such as swelling of the skin, redness, dryness, and pruritic Dexona 0.5 MG Tablet works as an anticonvulsant that lowers the abnormal nerve impulses in the brain that causes severe reactions like pain and seizures. Dexona cures nerve pains such