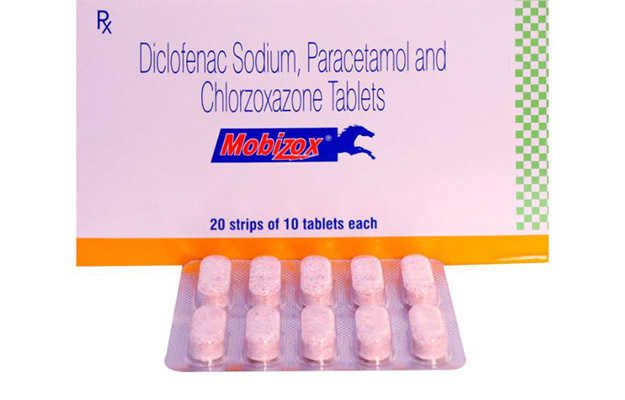 Mobizox is a pain reliever and muscle relaxer. It inhibits the synthesis of prostaglandins and blocks the nerve impulses that are sent to the brain thereby minimizing the discomfort caused to due to pain. It is prescribed by doctors to relieve pain due to muscle spasm, arthritis, minor surgeries, dislocations and fractures.

Mobizox is primarily used for relieving muscular pains. A few common medical conditions in which the medicine is prescribed are:

Mobizox may show the following side-effects. If any of these side-effects worsen or last for a longer duration, consult the doctor .

The dosage of Mobizox is decided by the doctor depending upon the health status and age of the patient.

Composition and Nature of Mobizox:

The active ingredients/salts of Mobizox are Acetaminophen (500mg), Chlorzoxazone (500mg) and Diclofenac (50mg). The medicine is a muscle relaxant usually used to treat muscle spasms.

Mobizox is a drug that falls under the category of analgesics. The medicine is used to treat muscle spasm and the pain caused by the same. Doctors also prescribe this medicine to manage fever and headache.

How to Use Mobizox Tablet?

Follow the directions as directed by the doctor and it’s better to take Mobizox at a fixed time. Swallow it as a whole. Do not chew, crush or break it. This medicine may be taken with or without food.

Mobizox is a muscle relaxant which works by suppressing the central nervous system to treat the muscle spasms and the pain caused by the same.

Warnings/Precautions- When to avoid Monizox Tablet?

Mobizox may increase the risk for side-effect when mixed with other over the counter medicines. Consult the doctor if the patient is on taking any of the below mentioned drugs –

Mobizox Interaction with other drugs:

The two variants of Mobizox are:

Medicines not to be taken with Mobizox Tablet:

How to store Mobizox Tablet?

It is advisable to store the medicine in a cool and dry place away from the reach of children and pets. The packaging of the medicine must be kept intact in order to maintain its effect when being administered.

Is it Banned in India?

Mobizox is a mixture of three drugs namely Acetaminophen, Chlorzoxazone and Diclofenac. It is strong medicine that can cause serious side-effects. The medicine is not banned in India but should be used only after consulting your doctor.

1) What is Mobizox used to treat?

Ans: Mobizox is a drug that falls under the category of analgesics. It is used for the treatment of muscle spasms and the pain caused by it. It may be prescribed in case of a headache and fever too.

2) What is Mobizox Tablet used for?

3) What are the side effects of Mobizox?

Ans: Mobizox may show a number of side-effects. Sleepiness and heartburn are the two most common side-effects exhibited by the medicine. Other side-effects include dry mouth, diarrhoea, nausea, vomiting and stomach ache.

4) Is Mobizox Tablet safe to use?

Ans: Unless you are allergic Acetaminophen, Chlorzoxazone or Diclofenac, Mobizox is a safe medicine to use. However, people with kidney/ liver related disorder and ladies during their pregnancy or lactation period should avoid this drug.

5) Is Mobizox a narcotic substance or a steroid?

Ans: Mobizox is neither a narcotic substance nor a steroid; it is an analgesic that relieves pain.

6) Should I stop taking Mobizox Tablet if my pain is relieved?

Ans: No, continue it for the specific time for which the doctor has prescribed the medicine. However, if used as a short-term pain reliever, it can be discontinued.

7) Can I take Mobizox with alcohol?

Ans: No, Mobizox should not be taken with alcohol as it can increase the medicine’s sedative effect and also the risk of other side-effects.

8) Can I take Mobizox Tablet with Paracetamol?

Ans: No, as Mobizox contains Paracetamol as one of its ingredients, taking Paracetamol separately may lead to overdose .

9) Can Mobizox cause serious side-effects?

Ans: Being a mixture of three drugs, Mobizox is strong medicine that may cause serious side-effects and hence should not be used without consulting a doctor. The drug may cause severe side-effects in patients allergic to its components or due to other interactions.

10) When to take Mobizox Tablet?

Ans: Though the absorption of Mobizox is not affected by food, the medicine should be taken with food as it reduces the chances of an upset stomach. 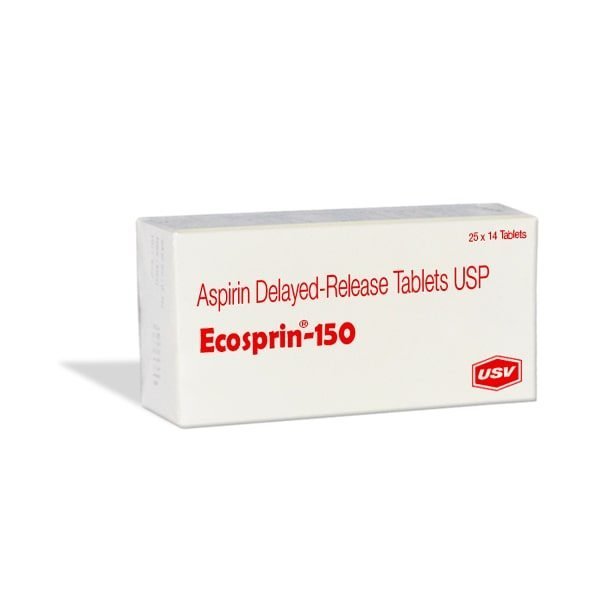 Ecosprin 150 Tablet is a drug which is used to treat and prevent clotting in the blood vessels. It also relieves inflammation and pain. Nature Non-steroidal anti-inflammatory drug (NSAIDs) Composition Aspirin and 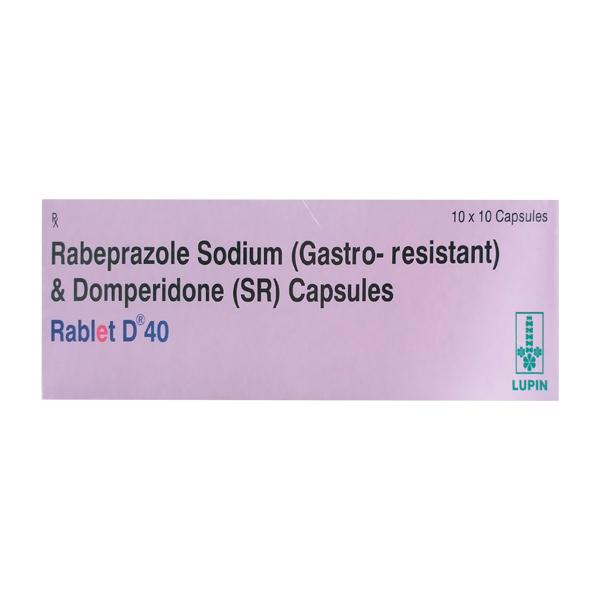 Rablet D Capsule is a part of the dopamine antagonists group of drugs. Rablet D is an antiemetic drug and is used to control the feeling of nausea and the