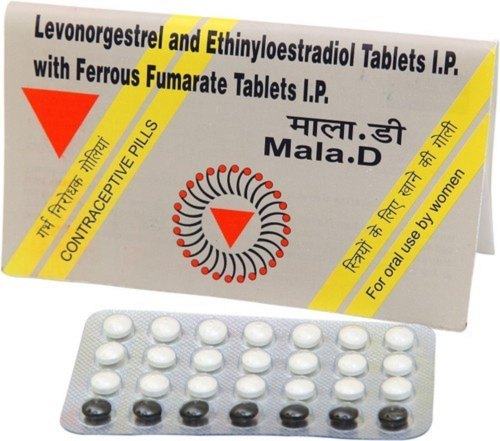 Mala D is an oral contraceptive pill. The brand is owned by the government, and it is administered to prevent unwanted pregnancy. The Mala D contraceptive pill is one of the different types of contraceptive pills that are believed to control pregnancy. It prevents pregnancy by preventing the ovulation of the egg and the implantation of the fertilized egg also. It also makes the cervical secretions thick.  This prevents the sperm from going through the cervix to reach the egg, or  It is proven to be 100 percent effective when it is taken correctly. It falls under the category of hormonal combined oral contraceptives.  This means it contains hormones estrogen and progestin.  It is a contraceptive pill that is provided at a subsidized price as an initiative under the various social programs of the government.

Composition and nature of Mala D:

The Mala D tablets pack consists of 28 tablets. Of this, 21 tablets are to prevent contraception. There are an additional seven tablets that are black in color which is an iron supplement.
Each watercolor tablet that is film-coated contains

The levonorgestrel is the synthetic progestogen, and Ethinyl Estradiol is the synthetic estrogen. The combination of these two synthetic hormones suppresses the production of gonadotropins. It inhibits ovulation and leads to cervical changes that prevent pregnancy.
Each brown colored tablet that is film-coated contains

Uses and benefits of Mala D:

Mala-D is supposed to be an effective contraceptive pill that is very successful in birth control when taken regularly. It can be taken as a post-coital pill also on prescription to avoid pregnancy. Apart from this Mala D is an anticoagulant and can be administered to prevent a blood clot in the arteries and veins as well. Since it is a reliable form of contraception that can be reversed easily it is being recommended by most medical practitioners. Fertility becomes normal almost as soon as you stop taking the pill. Mala D can be taken to
Avoid pregnancy after unprotected sex if administered within 72 hours

Side Effects of Mala D:

It is common to have aches too. It is better to contact a doctor in case you experience any of the side effects if you are not able to reach a doctor, it is imperative to go to at least a care center to get yourself evaluated as to whether it has got to do only with the contraceptive pills. These symptoms are again the symptoms that indicate serious disorders such as liver disease, gallbladder disease, blood pressure, or blood clots.

The dosage generally advocated for the prevention of pregnancy is one pill a day for 28 days including the seven iron supplements. But in the case of post-coital remedy and for treatment for deep vein thrombosis and pulmonary embolism, it is totally dependent on the doctor’s discretion.

How to use Mala D?

You are supposed to start the dose on the first day of your menstrual cycle, and you need to take a tablet daily for up to 21 days. Once done follow it up with the seven iron tablets in the strip that is black in color. You would generally get your menses when you are taking the black tablets. Once the pack is over, you would have to start with the next pack when you plan to have sex regularly with your partner. However, it is better to take the doctor’s advice and follow his instructions. In general, the healthcare provider or doctor might suggest the quick start method or the Sunday start method apart from the first-day method mentioned above, which is the general method. In a quick start method, you will be advised to start the first pill in the pack immediately. While in a Sunday start method, you would be advised to start the first pill on the first Sunday after your periods. In either of these starts you would be given a backup contraception method for the first week you start taking the combined contraceptive pills.

A woman’s menstrual cycle is between 28-32 days. It might be shorter for some and longer for some depending on other factors such as heredity, general health, and other such factors.  Ovulation period or the most fertile period when the egg is pushed down the fallopian tube. It is the time when the egg gets fertilized, and when the sperm reaches it, it fuses with the egg to form the fetus. It is considered the fertile period for women for pregnancy.

The entire process is controlled by different physical and hormonal changes. The lining of the uterus also is thickened for the fertilized egg to embed itself. When it does not happen the uterine wall, as well as blood, would come out. This is menstruation. The ovulation period for a woman with a normal cycle would be between the 12th day to the 16th day.

The oral contraceptive pill is a mix of hormones. A combined hormonal contraceptive pill means that it contains both estrogen and progesterone. However, their strengths are different. When you start taking the pill, you are actually starting a cycle. In a normal cycle, the egg is released, matures, and reaches the ovulation stage between the 12th -16th day. But when you take the contraceptive pill, ovulation is suppressed. This work is done by the synthetic hormones present n the white tablets in a pack of Mala D. This decreases the chance of pregnancy and also prevents the egg from getting embedded on the uterine wall.

When you take the brown tablets which are a placebo, it would act as the withdrawal period of progesterone and result in ina menstrual cycle.  This is the common use of the contraceptive pill. But, it can be used to alter menstrual cycles and to avoid pregnancy by taking it in a post-coital manner. This has to be done only after consulting a medical practitioner.

Related warnings and precautions: When to avoid Mala D?

It is not safe to take Mala D when you already have high blood pressure, history of bleeding in the stomach, hemorrhage in the brain, if you have a history of kidney diseases, or if you have a blood cell disorder. It is also important to tell your doctor when you consult him for starting Mala D about the other herbal medicines, dietary pills, and vitamin supplements as well as allergic reactions to certain food items. Mala-D is not safe to take when you are pregnant. It is not safe to use Mala-D when you are suffering from liver disease, unexplained uterine bleeding, or diabetes-related complications which include retinopathy, neuropathy, and nephropathy. Mala-D must not be used if you will be immobile for a prolonged period of time due to some major surgery. Sometimes oral contraceptives may cause breakthrough bleeding.  Breakthrough bleeding is nothing but bleeding or spotting between periods. That is why it is considered unpredictable as far as altering the menstrual cycle is concerned. It is advisable not to take any break between packs.

Another medicine that can be considered to be a perfect substitute for Mala=d in terms of its strength, composition, and form is Ovral L tablets. However, there are many other combination contraceptive pills that might have a slightly different composition and strength. Another substitute is Warfarin.

Interaction refers to the case when you should abstain from taking Mala D when you are already taking certain medicines for other illnesses. It is because they might interact unfavorably.  The Mala D tablets should not be used if you are already taking the following medicines
Phenobarbitol group- Epitan, Cobarb, Epiphen, Phenytal, Phenobarb, Phen  Phen, Garoin, Nytoin, Episol Plus,  Piplar Barbitoin, and others.
Carbamazepine group – Acetol, Mezapin, Carbazep, Mezaril, Tazetol, Normapine, Carcet, Seizotol.Zigma, Antilep, and others
Primidone group- Mysoline
Bosentan group- Bosentas, Lupibose, and others as it indicates serious interaction with these.
And a Moderate interaction with the Atropine, Ephedrine, and Ergotamine group of medicines.
It is not safe to take Mala D  in such a case.

1) Can I take Mala-d while I am breastfeeding my child?

Ans: It is better to go in for the use of IUCD or Intrauterine contraceptive devices when you are breastfeeding. It is because the pill might decrease the quality and quantity of breast milk.

2) Can I take Mala- D to alter my menstrual cycle?

Ans: Yes, you can do it. But only with a doctor’s advice. But one cannot guarantee its effectiveness considering that it might sometimes cause breakthrough bleeding or spotting in between periods as a result of certain antibiotics you might be taking while you are using Mala-D.

3) What if I miss my periods while taking Mala-D?

Ans: This could be because you are pregnant or it could be without any special reason too. But, it is important to consult the doctor and find the reason anyway.

4) Can Mala-d be taken by a person who smokes?

Ans: It is imperative to tell the doctor that you smoke before taking Mala-D. Smoking does not augur well with Mala- D. It will increase the risk and the seriousness of the side effects. The risk increases, if you are obese and over 35 years old. The number of cigarettes you smoke also counts. It is better to be cautious if you are a smoker.

5 ) What happens if I do not get my periods after stopping a birth control pill?

Ans: Though in most cases fertility returns immediately after stopping the pill, in certain cases, it might take a few months. If you do not get your periods even after that, it could happen only if the pill has interfered with the making of the hormones that are involved in the process of ovulation and menstruation called post-pill amenorrhea. It is better to take a pregnancy test and also consult the doctor.

6) Can I be sure of the results of the pregnancy test, if it happens immediately after stopping the pills?

Ans: The results will be accurate as pregnancy tests measure only the pregnancy-related hormone called human chorionic gonadotropin (HCG ) in your blood and urine. The active ingredients in the birth pill would in no way affect the test results.

7) Will taking several birth control pills at a time for emergency contraception?

Ans: It is possible to use combination hormonal contraceptive pills for emergency contraception. But taking many pills at a time is not the right way to go about it. There are many systematic dosage patterns to be followed. It is better to take the advice of a doctor for the same.

8) Does the birth control pill cause weight gain?

Ans: Studies indicate that weight gain- if it exists at all is quite small. But there is a chance for you to retain fluid, which would make you feel like you have put on weight particularly in the thighs, hips, and breasts. The pills do act on the fat cells making them large, but they do not increase their number.

9) Can I get pregnant during the week on non-active placebo pills?

Ans: No, in 99% of the cases, unless you have missed one or several doses of the pill in the cycle. 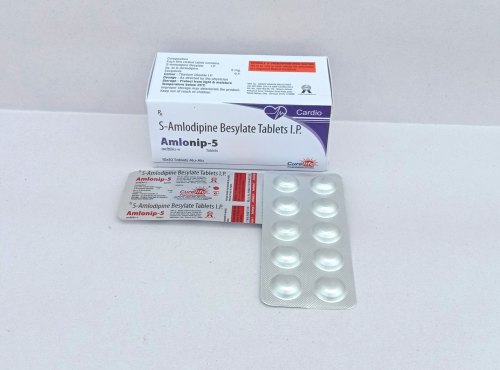 Amlodipine 5mg is a medicine that can be consumed by mouth. This medicine is available in the market that comes with the drug name Norvasc. In fact, it is a 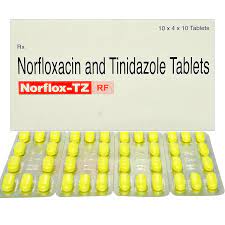 Norflox-TZ tablet belongs to the class of quinolone antibiotics. It helps inhibits the continuous growth of bacteria and parasites thus preventing bacterial infections. Also, It is prescribed for the treatment Telma H tablet is a prescription medicine that is primarily used to treat high blood pressure. By maintaining adequate blood pressure, the medicine also helps prevent the risk of renal