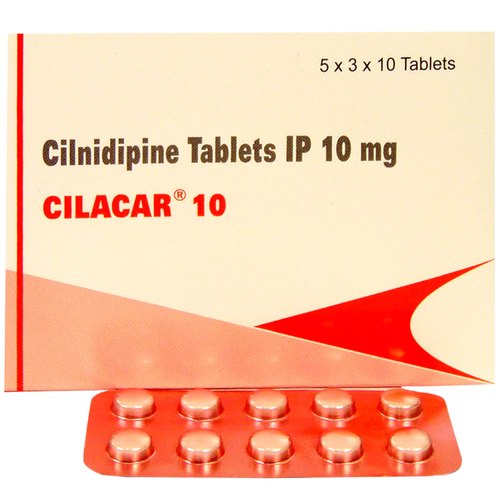 Cilacar 10 MG Tablet is used for patients suffering from high blood pressure. Cilacar works as a calcium channel blocker and it is used to make the heart pump blood throughout the body in a more efficient fashion.

Manufactured and marketed by Jb Chemicals and Pharmaceuticals Ltd, Cilacar is a prescription medicine that belongs to the class of drugs known as ‘Calcium Channel Blocking Agents’. The medicine contains Cilnidipine as its active ingredient that works by blocking the entry of calcium into the cardiovascular muscles to lower blood pressure. The medicine is used to treat hypertension (high blood pressure).

Uses and Benifits of Cilacar:

Cilacar 10 MG Tablet is a Calcium Channel Blocking Agent that is primarily used to treat Hypertension or High Blood Pressure. Hypertension is a medical condition in which the blood in the blood vessels exerts an abnormally high force on the walls of the artery. Usually, the condition is classified as hypertension when the blood pressure reaches 140/90 or beyond. Hypertension may result in heart attack or stroke.

Cilacar is a safe drug to use as long as administered in accordance with the prescription of the doctor. However, in certain cases, it may result in some side effects such as:

If any of the above-mentioned side effects persists or worsens, the patient must seek medical attention immediately.

The patient should administer Cilacar 10 mg Tablets in accordance with the instructions prescribed by the doctor. Usually, doctors prescribe two tablets a day. However, the dosage may vary with the severity of the ailment to be treated. It may vary from 5 mg to 20 mg. A few other factors that help in deciding the dosage are the BMI of the patient, the age of the patient, and other underlying health concerns.

Composition and Nature of Cilacar:

Cilacar is a drug that falls into the category of Calcium Channel Blocking Agents. Each 10 mg Cilacar Tablet contains 10 mg Cilnidipine as its active ingredient. Depending upon the variant, the concentration of Cilnidipine may vary.

Warnings and Precautions – When to Avoid Cilacar?

A few concerns that should be taken into consideration before consuming Cilacar 10 mg Tablets are:

Below are a few medicines that have the same strength and composition as that of Cilacar 10 mg Tablet and can be used as its substitute:

Cilacar Interactions with Other Drugs:

Mixing two or more medicines may change how the drug works and may increase the risk of side effects. A few drugs that may interact with Cilacar are:

Interaction of Cilacar 10 mg Tablets with alcohol is not known. However, when taken along with alcohol, the medicine may not show the desired results. Hence, it is advisable to discontinue the consumption of alcohol during the course of this medicine.

Cilacar 10 mg should not be consumed in case of:

Variants of Cilacar Tablet are:

The active ingredient in Cilacar 10 MG Tablet, Cilnidipine, works as a calcium channel blocker, by blocking the activity of calcium channels in the blood vessels. It reduces blood pressure and makes the heart’s actions of pumping blood throughout the body more efficient.

Cilacar Tablets should be consumed as per the prescription of the doctor or the patient should follow the directions prescribed on the label. One must not increase or decrease the dosage without consulting the doctor. It is advised to swallow the whole tablet; without chewing, crushing or breaking it.

The absorption of Cilacar is not influenced by the food and thus can be consumed with or without food, as advised by the doctor. However, to prevent any undesirable effect, especially in patients suffering from gastric disorders, it should be taken with food or immediately after food.

When is Cilacar Tablet Prescribed?

Cilacar 10 mg Tablet is a calcium channel blocking agent that is primarily used to treat elevated levels of blood pressure (or hypertension). Doctors may also prescribe this medicine to prevent the risk of heart attack and stroke.

Medicines That Should Not be taken with Cilacar 10 MG Tablet:

Taking Cilacar Tablet in combination with other over-the-counter medicines, herbal medicines or vitamin supplements may increase the risk of side effects. A few drugs that should never be taken with Cilacar Tablets are:

Cilacar Tablets should be stored in a cool and dry place away from direct heat and sunlight. One must keep the medicine away from the reach of children and pets. The packaging of this medicine must be kept intact in order to maintain its effect when being administered.

1) Can I drive or operate heavy machinery post administering the Cilacar Tablet?

Ans: No. Cilacar Tablet has been reported to cause drowsiness and dizziness in certain cases. Hence, it is advised to avoid driving or operating heavy machinery during the duration of this medicine.

2) I missed a dose of Cilacar, what should I do?

Ans: Yes, Cilacar 10 MG Tablet has been reported to cause decreased Libido.

4) Can Cilacar tablet be consumed during pregnancy?

Ans: No, Cilacar has been reported to harm the foetus and hence, the use of this medicine during pregnancy is strictly prohibited.  However, for case-specific recommendations, one must consult a doctor.

Ans: No, Cilacar has been reported to affect the quality of breast milk. The medicine may harm the infant; thus its use during the lactation period is strictly prohibited. However, for case-specific recommendations, one must consult a doctor.

6) What is Cilacar used for?

Ans: Cilacar is a calcium channel blocking agent that is used to treat hypertension and prevent the risk of heart attack and stroke.

7) What are the side effects of Cilacar?

Ans: Cilacar is a safe medicine as long as administered in accordance with the prescription of the doctor. However, in certain cases, it may show some side effects such as, dizziness, hypotension, muscle pain, skin rashes, decrease in libido, facial swelling, shaking of hands and feet, altered heart rate, abdominal pain, diarrhoea, and frequent urination. In case the side effects persist or worsen, a doctor should be consulted at the earliest.

8) What is Cilacar used to treat?

Ans: Cilacar is used to treat hypertension. It also helps prevent the risk of heart attack and stroke.

9) What is the difference between Amlodipine and Cilnidipine?

Ans: Both Amlodipine and Cilnidipine are used to treat hypertension. They both are quite efficient in reducing blood pressure in patients suffering from hypertension. However, the difference lies in their work. Cilnidipine is an N-type and L-type calcium channel blocker, closely associated with a lower probability of pedal edema as compared to that of Amlodipine, an L-type calcium channel blocker.

10) What is meant by calcium channel blocker?

Ans: Calcium channel blockers are prescription medicines that work by relaxing the blood vessels to increase the supply of blood and oxygen to the heart. They also help reduce the heart’s workload.

11) Can I get Cilacar Tablet without a prescription?

12) Should Cilacar tablet be taken with food or without food?

Ans: Cilacar is a medicine whose absorption is not influenced by the food. Hence, it can be taken with or without food, as advised by the doctor. However, to minimize the risk of gastric disorder, one should consume this medicine after having a meal.

13) By whom should the Cilacar tablets be avoided?

Ans: Cilacar should be avoided by:
Patients suffering from coronary artery diseases, liver impairment, and hypotension
Pregnant ladies and nursing mothers
Patients taking other medicines such as Cimetidine, Primaquine, and Carbamazepine
Patients who are hypersensitive to constituents of Cilacar or calcium channel blocking agents

14) How does Cilacar Tablet work?

Ans: Cilacar is a calcium channel blocker that contains Cilnidipine as its active ingredient. It works by blocking the entry of calcium into the cardiovascular muscles, thereby preventing the contraction of muscles in order to reduce blood pressure.

Ans: No, Cilacar is not banned in India.

16) Can Cilacar Tablet be consumed while suffering from jaundice?

Ans: No, Cilacar is known to show adverse effects on the liver. Hence, it is advised to avoid the use of this medicine by patients suffering from jaundice or any other liver-related disorder.

17) Can I stop taking Cilacar Tablet if my symptoms are relieved?

Ans: No, you should continue taking Cilacar Tablet for the specific duration for which the doctor has prescribed the medicine. Abrupt discontinuation of the medicine may result in angina or severe chest pain. In case your symptoms are relieved, you must consult a doctor.

Ans: Cilnidipine is an N-type and L-type calcium channel blocker that helps lower down blood pressure. It is the active ingredient in Cilacar Tablets. 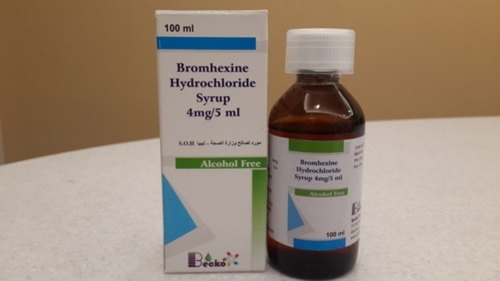 The mucus present in the respiratory tract should be expelled on a regular basis so that you can avoid chest congestion. Bromhexine will support the body mechanism to clear up Razo 20 mg tablet is a prescription medication for the treatment of ulcers in the stomach, GERD and acidity disorders. It gives relief by reducing the acid levels in the 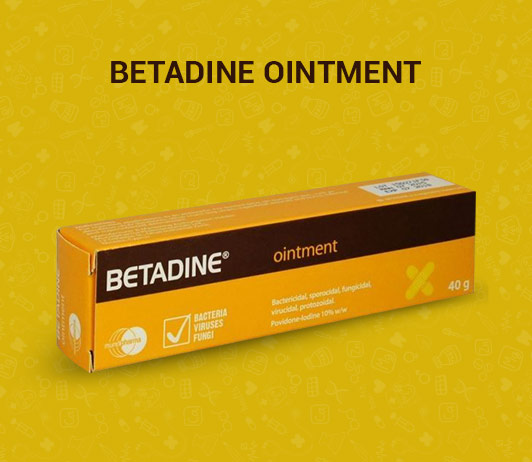 Betadine Ointment is a common broad-spectrum antibiotic. In the ointment form, it is used only for topical infections. The ointment form is more concentrated than the antiseptic cream. It is